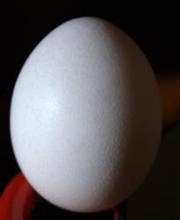 To boil an egg without the egg sticking to the shell when you peel it, all you need is one extra ingredient in the water and plenty of it: salt. Sometimes when I made hard boiled eggs in the past, the shell would stick to the white part of the egg when I peeled them. But after I began adding 2-3 tablespoons of salt, this is a problem of the past, and the egg shells just slide right off.

There are theories that shells are sticking less in older or younger eggs, but I haven't observed any difference, old or new eggs, as long as salt is added. I can't remember if I read about the salt trick, or was just experimenting. Other people do also mention adding salt to the water on the Internet, but not in these amounts :-)

How to boil the perfect egg

This is now on top of my to do list :) Gotta try this out.
I hate it when it is impossible to peel an egg, but I thought this was just an old "skrøne" with the salt.

That's a great one to remember. Here's MY pro-tip: Put the eggs in the cold water and cook it until the water comes to a boil. Turn the heat off and let the eggs sit in the hot water about 12 to 15 minutes before peeling. It will cook perfectly and you won't get a green rim around the yolks. Now, with the salty water, the entire operation will be painless.